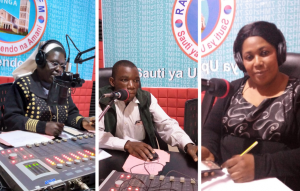 Tanzania now counts with a vibrant, trustworthy, and sustainable radio station. The diocese of Mbinga, located in the Ecclesiastical province of Songea, is now home to the first Catholic radio station in the area: Radio Hekima.

The tenacity and hard work of H.E. Bishop John Ndimbo brought to life this radio station in early 2020, a dream that he and his team had been working on since 2013. They knew that building a radio station was going to be challenging; that getting the permits would take a long time and that moving the equipment would be complicated because of the difficult roads that lead to Mbinga, but they set their minds to accomplishing it because they knew how life-changing it would be for their community. The diocese, located in the southern part of Tanzania, near neighboring Malawi, counts with around 350.000 people that have very limited access to the media. Radio frequencies from Dar Es Salaam and Radio Maria reach the diocese, but they air national news, not local. The people of Mbinga did not have their own voice, until now.

With the technical support of SIGNIS Services Rome and the funds provided by the Italian Episcopal Conference and Aid for the Church in Need, Radio Hekima started broadcasting on March 31st., 2020. Meaning “wisdom” in the local language Swahili, the radio station’s wish was always to be an effective and efficient facility guided by the values of being beneficial, kind of compassionate, and to spread peace and knowledge. All of this was accomplished since the beginning, as they started airing their many programs right in the middle of the covid-19 pandemic. Radio Hekima quickly adapted and started spreading awareness and information about the virus; how to protect oneself, how to explain the situation to children, knowing about the risks, and so on. This translated into Mbinga being one of the least affected areas of Tanzania by the virus at the beginning of the pandemic. As Fr. Deogratias Nditi, Bishop Ndimbo’s assistant, said in our program SIGNIS With You Live, he likes to think that the radio contributed to protecting the citizens through awareness and information, as it still does.

Apart from the valuable and fact-checked information that is given about the virus as they fight the spread of fake news, Radio Hekima also focuses its programs on education, environmental awareness, human rights, health, cultural diversity, female empowerment, youth development, sports, entertainment, and local, national and international news. Its goal is to reach and serve all Tanzanians: children, church and political leaders, farmers, the elderly… people from all paths of life. The radio station aims at improving the rural communities in their social and economic development; to be more in contact with society, justice, and peace, and is working hard and constantly to serve Mbinga also thanks to what Fr. Deogratias called their “divine blessing”:  the everlasting support of SIGNIS Services Rome.