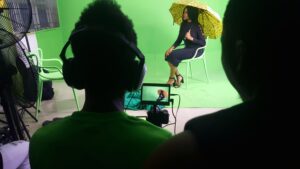 Cameroon is a country in Central Africa known as Miniature Africa because of its climate, human, linguistic, and cultural diversity. It has an area of more than 475 thousand km2 with a population of about 29 million inhabitants, and consists of 10 regions including the Adamaoua region, where the diocese of Ngaoundéré is located.

In an interview on SIGNIS With You Live, Fr. Aurélien Lehoun Mbea – the Director of Communication of the Diocese of Ngaoundéré – defines the Cameroonian people as “multicultural, warm and welcoming” and highlights the potential of the population, but especially the local youth by describing it as «artistic and full of talents».

Since its creation in 1982, the Diocese of Ngaoundéré has always been aware of the importance of communication for evangelization, so it was from the first moments that the diocese emphasized the will and the need to build a recording studio to be able to share the Good News. In addition to this, this project fully meets the needs of local youth, as the audiovisual production studio represents an opportunity for the youth to express themselves and build a career.

Realizing this project was tough at first, but with the technical support of SIGNIS Services Rome, responsible for developing the project and contributing to the search for funds, the project began to progress again. The goals of this initiative are to equip the audiovisual production studio and train the youth, because the involvement and commitment of young people is a fundamental aspect of the diocese of Ngaoundéré and, as pointed out by Fr. Aurélien Lehoun Mbea, the main goal is to “train young people, bring out their talents, promote and enhance them”.

Unfortunately, the second phase of the project – the installation of the equipment and the organization of training sessions – had a moment of slowdown due to the delay in shipping, but the Diocese of Ngaoundéré was not discouraged and began to organize training in local parishes to select the young people who will participate in the activities; and to create small productions with the means at their disposal, broadcasting them on Facebook, Telegram and other social networks.

Finally, Fr. Aurélien stated that the diocese of Ngaoundéré took to heart the theme of the fifty-sixth World Day of Social Communication launched by Pope Francis based on listening with the ear of the heart, stressing “the importance of listening, of considering others, and of caring for others in order to be able to free oneself and the other”, and thus underlining the fundamental role that communication plays in social development.