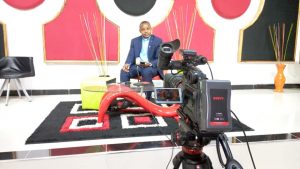 Since its very beginning television has been an important element in our society. It impacts our cultural, social and educational life and is a dynamic means to connect with the world. Even with the advent of technology and social media, television still represents a powerful tool to communicate and share via engaging storytelling and compelling narratives in various formats.

As Catholic communicators we understand and appreciate the value of good television and have witnessed how impactful it can be in a society where there are not many options to choose from when it comes to gathering information or being seen. There are many towns, villages and areas where television signal is lacking and it is not possible to benefit from the opportunities and possibilities it offers. Television can support education in areas of conflict, keep society informed about current events, spread knowledge about safety and health, bring awareness to issues like climate change and human rights, be a source of entertainment and also a way of spreading the Gospel and getting people closer to their faith.

For this reason, SIGNIS Services Rome offers the possibility to build your own television station or improve the one you already have. It will allow you to produce and organize various contents of very high quality and in line with world standards.

Our Television Studio Kit is cost effective and equipped with a playout system that lets you schedule and organize your content. We also assist you in finding the right transmission systems for the TV signal and provide technical support and knowledgement so you can make the most out of your studio. As professionals in communication technologies, we have supported the development of more than 30 television studios worldwide.

Only to name a few, we have worked alongside the Montfortian Missionaries to renovate the digital television broadcasting studio equipment of Malawi’s Luntha Television where now there is a television production studio composed of video cameras, video editing equipment and software, lights and microphones and a production direction studio with a video mixer and a rack connected to video cameras and various components for live broadcast, among other things. In Zambia we offered consulting for developing a similar television studio and in Ecuador we were involved with TeleGalapagos to modernize their transmitters. At the moment we are getting ready to create a new catholic national television in Mali to promote democracy and interreligious dialogue. These are just some examples of our work and our commitment to supporting high-quality television, and we are ready to do the same for you and your project.

Be seen and heard. Spread information and entertain. Promote Catholic and civil values. Now. Contact us via ssr@signis.net to get more information about how you can get a new television station for your diocese, university, or media center and how you can use it to promote media for a culture of peace.