RADIO NOTRE-DAME: THE VOICE OF THE ARCHDIOCESE OF BERTOUA 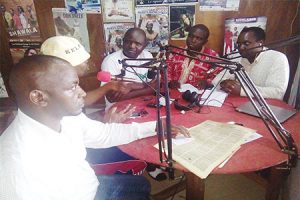 The Archdiocese of Bertoua will broadcast from its own Catholic radio station – Radio Notre-Dame. The idea to bring an independent Catholic voice to this area of Cameroon emerged in 2017 to create a space of debate and intercultural dialogue, and a source of information and entertainment, for more than two thousand people.

Monsignor Joseph Atanga, head of the project and Archbishop of Bertoua since 2009, reached to SIGNIS Services Rome for its expertise and support to develop what would become Radio Notre-Dame When the project was born there were already other two radio stations operating in the area, but Mons. Atanga felt there was a need for an independent station to increase information pluralism in the area. Bertoua is affected by different economic, political and social issues, that increased when in 2013 it welcomed more than two thousand refugees that fled the Central African Republic, resulting in having a very mixed population that gathers people from different cultures, religions and backgrounds. For this reason, the main goal of the radio station focuses on building a space of intercultural debate and dialogue for peace where social cohesion and harmony will reign.

The first phase of the journey consisted in SSR’s evaluation of the project and research for funds, that were kindly given by the Italian Episcopal Conference, setting everything in motion for buying the necessary material and shipping it to Cameroon in December 2017. The first step was setting up the radio tower, the transmitter and the recording equipment, and at the same time SSR started working on creating the website of the Archdiocese. In the website, it is possible to find information about the Archdiocese and its activities, its structures and projects, and once the radio will start going live it will also be possible to listen to the programs online.

The intention is to air at least sixteen hours of programs and music per day. The shows are very varied and wish to integrate the Cameroonian culture and that of the Central African refugees by making the programs in their common language, French, but also music from both countries. Every morning the day will begin with the mass, followed by a newscast provided by Radio Vatican Français, and educational programs that touch topics such as health, the environment, art, economy and culture. Another focus will go to current issues, entertainment programs, building a new sense of citizenship and receiving calls and feedback from the listeners to talk about their concerns and opinions.

A second phase of the project to be developed in the future concerns the annexed services that are meant to economically support the work of the radio station and its collaborators, apart from the advertisement revenue. This phase looks at having solar panels to help fuel the station, imparting training, having a studio to record audio-visual material that could also be used by people external to the radio station, like musicians and artists. This project seeks to benefit all the population of Bertoua, mainly the people that live in remote areas and the different ethnic groups, and wishes to tackle the unemployment issue in the area. Radio Bertoua intends to employ several profiles of people, from journalists to technicians, and will also welcome students from the surrounding universities to do internships and form themselves there.

The work SSR has been doing with Mons. Atanga and with the support of the people of Bertoua, will lead this area of Cameroon to have a more independent voice, a new source of information and a new tool for evangelization, undoubtedly improving the livelihood of the local population. Radio Notre-Dame and its annexed services will create jobs, hold the public powers accountable, improve media pluralism, be a source of collaboration and a space for sharing ideas and hopes, always hand on hand with the support of SIGNIS Services Rome.